Kenyan activist, lawyer, and blogger. She currently holds the position of Policy Manager for Africa with Google

Ory Okolloh is a Kenyan activist, lawyer, and blogger. She currently holds the position of Policy Manager for Africa with Google. In 2006 she co-founded the parliamentary watchdog site Mzalendo (Swahili:"Patriot"). The site sought to increase government accountability by systematically recording bills, speeches, MPs, standing orders, etc.When Kenya was engulfed in violence following a disputed presidential election in 2007, Okolloh helped create Ushahidi (Swahili: "Witness"), a website that collected and recorded eyewitness reports of violence using text messages and Google Maps. The technology has since been adapted for other purposes (including monitoring elections and tracking pharmaceutical availability) and used in a number of other countries.

Deputy Secretary-General of the United Nations

​Asha-Rose Migiro of the United Republic of Tanzania took office as Deputy Secretary-General of the United Nations on 1 February 2007. She is the third Deputy Secretary-General to be appointed since the post was established in 1997. Ms. Migiro served as Minister of Foreign Affairs and International Cooperation from 2006 to 2007 — the first woman in the United Republic of Tanzania to hold that position since its independence in 1961. Before that, she was Minister for Community Development, Gender and Children for five years. 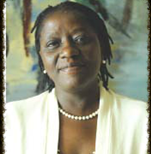 Commissioner of Social Affairs on the African Commission

Bience Philomina Gawanas (Born 1956 in Namibia) is Commissioner of Social Affairs on the African Commission. She was a Commissioner on the Public Service Commission in Namibia from 1991 to 1996, and an Ombudswoman in the Namibian Government from 1996 to 2003.

She has also been a Lecturer in Gender Law at the University of Namibia, Director of the Board of the Central Bank of Namibia, and involved in many non-governmental organizations including Secretary-General of the Namibian National Women's Organization and patron of Namibian Federation of Persons with Disabilities.

As Chairperson of the Law Reform Commission she oversaw the passage of the Married Persons' Equality Act. The commission also did extensive work on Rape Acts and other important laws that were eventually passed after her time.

She attended secondary school at St Theresa Catholic school in Tses, Karas Region, southern Namibia. From Tses she went to University of the Western Cape (UWC) in Cape Town, South Africa, to study law; Catholic sponsors helped her resist the pressure of apartheid officials to switch careers from law to nursing. Namibia was occupied illegally by South Africa until 1990. "When I decided to study law, a white schools inspector told me that as a black child my intelligence was lower than that of a white child and that maybe law was not meant for me," she said to one interviewer. "Today I am a lawyer and I have proved that intelligence has got nothing to do with a person's colour."

Nigerian novelist and short-story writer and recipient of a 2008 MacArthur Foundation Fellowship.

Chimamanda Ngozi Adichie (born September 15, 1977) is a Nigerian writer of Igbo descent. She has been called "the most prominent" of a "procession of critically acclaimed young anglophone authors "which is succeeding in attracting a new generation of readers to African literature" Early life and education.

Born in the town of Enugu, she grew up in the university town of Nsukka in southeastern Nigeria, where the University of Nigeria is situated. While she was growing up, her father was a professor of statistics at the university, and her mother was the university registrar.

In 2003, she completed a master's degree in creative writing at Johns Hopkins University. In 2008, she received a Master of Arts in African studies from Yale University.Adichie was a Hodder fellow at Princeton University during the 2005-2006 academic year. In 2008 she was awarded a MacArthur Fellowship. She has also been awarded a 2011-2012 fellowship by the Radcliffe Institute for Advanced Study, Harvard University.